It may seem that I have been lax by not posting anything new.  Oh well, I started 2015 in the ICU and I am now recovering at home.  My health has been problematic for some time now, but that’s a boring story left to family and loved ones.  Now to the excitement of horse racing!

One of our new claims ran on Tuesday.  Her name is Yuma Thurman.  I was happy to report our claiming of her.  Coincidentally, my wonderful trainer Drew Fulmer and I just happen to meet the afternoon prior to our claiming her and I asked him to check her out.  Although I might suggest a claim, he is my expert and he makes the final call.  That evening, he did his research about this horse, checked her out the next day and claimed her.  We were so lucky.  No one else noticed her so there was no other claim for her.  She is a fabulous runner and she proved it on Tuesday.  Here is the official picture from Turf Paradise. 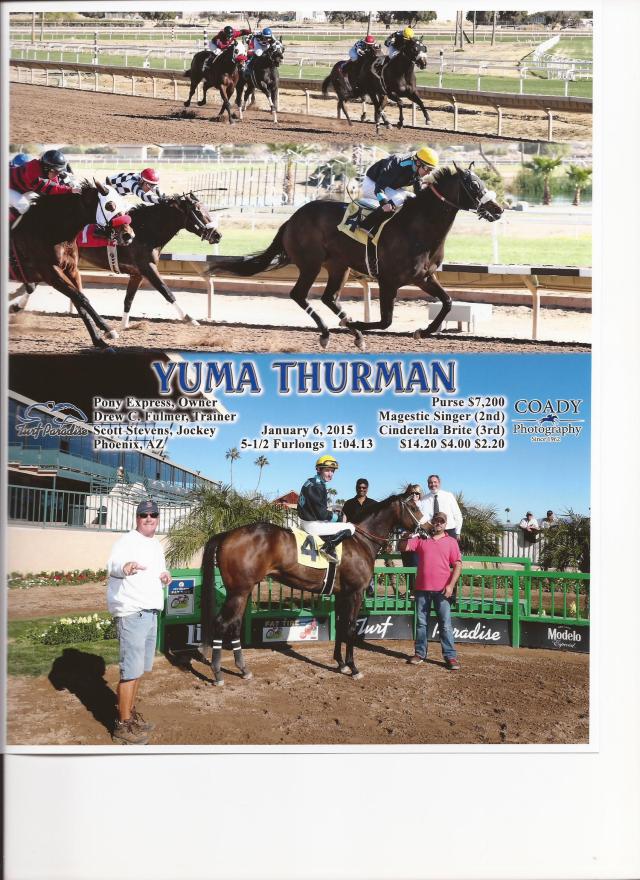 I must say that our wonderful trainer, Drew Fulmer has started off 2015 with a bang!  We claimed four horses at the end of 2014.  Yuma Thurman was one of the claims.  We claimed her for a mere $3,000 and she won this starter allowance.  I believe that is a wonderful achievement.  We got lucky claiming her.  Lady Luck was surely smiling on us.  This horse is part of one of our new partnerships Pony Express Racing, LLC.  We plan to continue with this partnership and at this time the partnership owns two horses.  The other horse is Quick Cielo and will be running on Saturday.

As I said, our trainer started 2015 with a bang.  On Monday, January 5th he had a win with Canard.  Canard is currently the oldest horse in his barn, but at 10 years old, the old boy still has it!

We also had another entry on Monday with Berry Valid.  She led the race most of the way, but it proved a little too long for her and she finished 4th.  She ran a fantastic race and we will enter her at a slightly shorter distance next time out and look forward to success. Drew’s third entry on Monday was my favorite Tonight at Eleven.  Unfortunately, I have to say he ran miserably.  Tonight at Eleven has not performed well since I have been ill and unable to visit him as often.  I am hoping once I feel better that I can have a long talk with my favorite horse and get him back to his old winning ways.  Only time will tell.

On Tuesday, we had our win with Yuma Thurman as previously mentioned.  Yesterday, we had two horses running.  A new claim, Cut to the Front came in 2nd.  We claimed him for $3,000 and raised him to $6,250.  It was an exceptionally fast race, but he managed to get up for 2nd.  He closed so well that I am confident that we have a real winner in him.  We also had our oldest mare run yesterday.  Her name is Dress Blues.  She ran a tough race and finished 4th.  She only missed by about a length so she was right there.  The good news is that by finishing 4th, she kept her condition so we anticipate a good result next time out.  Again, only time will tell, but she is a lovely horse with a lot of heart.

Today is an off day at Turf Paradise.  Good thing.  Our trainer has been working too hard getting all these runners ready and he needs a break too.  On Friday, we have Twilightinpriddis running.  I am excited about her race.  She is the most beautiful horse I have even seen and will post her picture as soon as possible.  Saturday, we have Quick Cielo going.  Sunday is an off day again at Turf Paradise — can’t compete with football.  On Monday, we have Pursuxit running again.  So you can see that we have been very active so far this year.  I believe 2015 will be an exciting time for Drew Fulmer Racing Team.  Keep watching for us — we’re on the move!