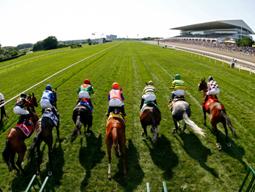 Katie’s Dan made his way to the USA and his debut race was at Hollywood in California in December 2009.

Katie’s Dan was claimed by our trainer Drew Fulmer on January 7, 2012.

Turf Paradise hosts a series of races called the Turf Series. Horses compete in these distance races on the turf, with each race longer than the prior race. Katie’s Dan was claimed with the turf series in mind. Being from New Zealand, Katie’s Dan was the perfect horse for running on the turf and he displayed endurance for the long distant races.

I was fascinated by this wonderful horse. His coat was much thicker than any of the other horses and looked like a fluffy bear. Our trainer Drew Fulmer had to have him shaved to endure the heat of Arizona and I suppose to make him more aero-dynamic.

Since this horse was a foreign born, I was sure that it would be fun to try to talk to him with an accent from the region. When my children were young, we watched a wildlife documentary TV series called The Crocodile Hunter hosted by Steve Irwin. Here’s a photo of The Crocodile Hunter for those of you who remember his series.

The next time I visited Katie’s Dan at the barn, I decided that I would attempt to mimic an Australian accent (like that of the Crocodile Hunter) when talking to him. Well, thereafter whenever I was at the barn, Katie’s Dan watched my every move, stretching his neck as far as he could and seemed more attached to me. Katie’s Dan is such a sweetheart that whenever I have invited friends to see my horses, I am sure to take them to Katie’s Dan’s stall because he is by far the gentlest horse, always happy for the company and an extra carrot.

Back to racing — after claiming him, we had a few uneventful races with Katie’s Dan but the races were on the dirt and he really needed a turf track to compete. He finished 3rd on the first turf race he ran for us and I felt we were really making progress.

We were on our way to the Turf Series. The first two races of the series were a real low point for me. I blame the jockey for the poor performance. I try not to judge the ride of any of our jockeys. I know that it is a dangerous sport and the jockey has to make split second decisions at the high rate of speed. Well, this is the one time I was very critical of the jockey and wondered if we could continue to be successful at the racing game. This could easily have been a turning point for us, but our trainer Drew Fulmer assured me that he would “turn things around”. We finished the season at Turf Paradise and the horses were off to Farmington, New Mexico.

Once in Farmington, it was time for Katie’s Dan to race. I was somewhat concerned since Sunray Park in Farmington does not have a turf course. Fortunately, the track at Sunray is deeper and Katie’s Dan seemed to like it. On race day, the jockey who was assigned to Katie’s Dan was hurt in the prior race and now we were without a jockey. Were we doomed by yet another setback? Don French agreed to ride for us and did a phenominal job. Katie’s Dan won the race. Here is a picture of Don French on Katie’s Dan in the winner’s circle. This is by far, one of my favorite pictures — by the look on his face, you would think Don just won the Kentucky Derby. What a fun day! 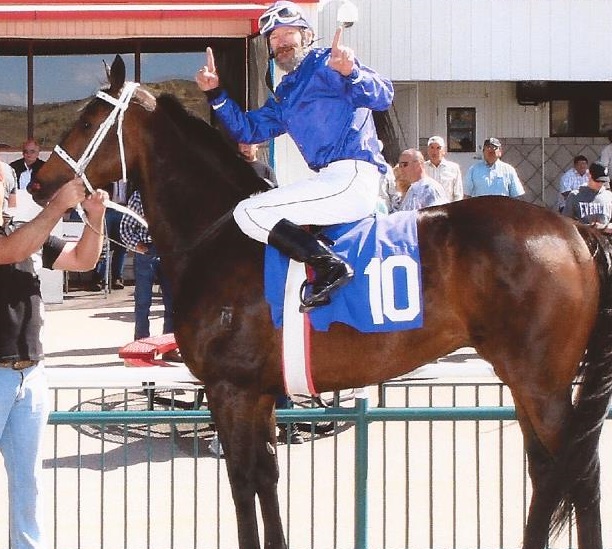 Katie’s Dan went on to win another race at Sunray and Drew Fulmer had really turned things around as promised.

When the Turf Series at Turf Paradise arrived for the 2012-13 season, Katie’s Dan was ready and won! We were finally successful in winning in the Turf Series as we had originally planned, it just took a little longer. 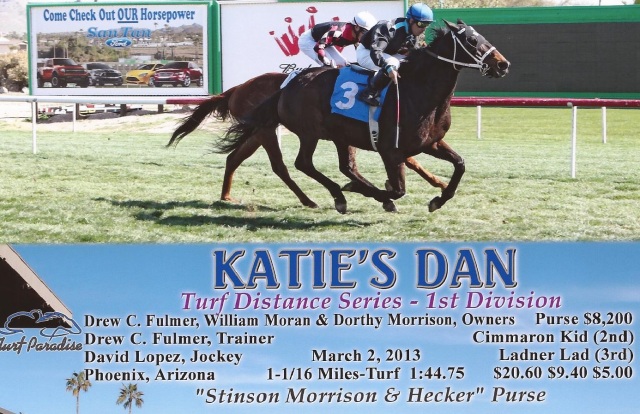 There were a few more races left in the series and Katie’s Dan was training for the next. While galloping, Drew saw that something was not quite right. Upon examination of Katie’s Dan, it was decided that his racing days were done.

Unlike some trainer who will push a horse to the point of breaking down, Drew cares more for the animals than the possibility of making a few bucks.

Katie’s Dan is still healthy but now retired from the racing circuit. Drew found him a good home where he is a riding horse on a ranch. He can spend the rest of his days happily just being a horse without the pressure of competition. I will miss seeing Katie’s Dan at the barn, but I am happy knowing that he is safe and well taken care of.